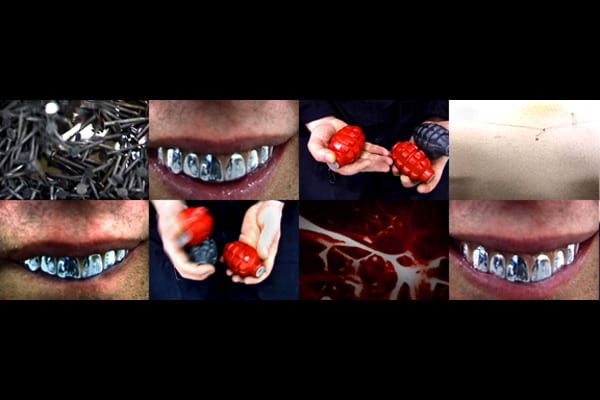 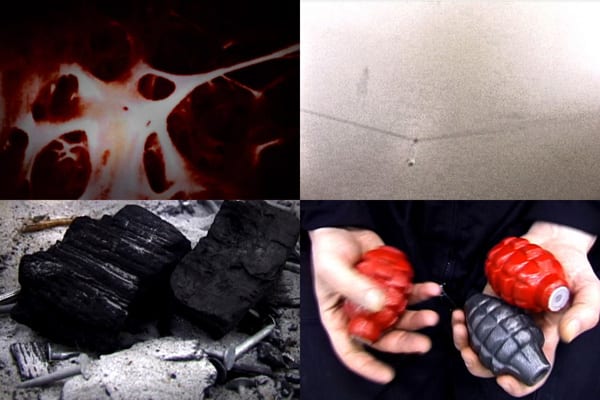 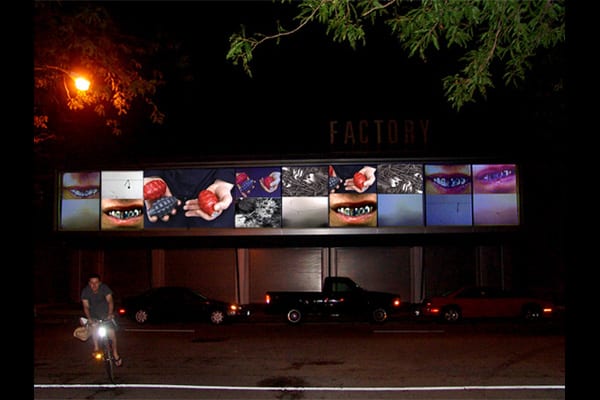 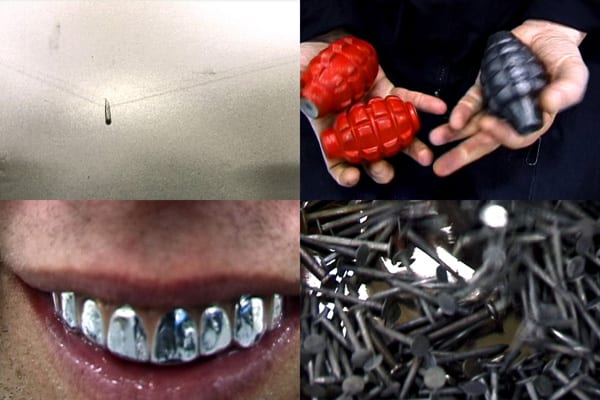 Tooth and Nail20 is a 20-celled, five-channel 12-x80-foot video projection on the façade of the Hyde Park Art Center in 2008. The 3:58M video is comprised of hand grenades, burnt ash, nails and a safety pin, and an original soundtrack. It was part of the Consuming War exhibition, curated by Barbara Koenen, featuring the work of 14 Chicago artists who have been compelled to make art that reflects on wars in Iraq. Consuming War included works by Lynda Barry, Wafaa Bilal, Adam Brooks, Burtonwood & Holmes, Fred Holland, Edra Soto, Harold Mendez, Ellen Rothenberg, Dolores Wilber, and Michael Hernandez de Luna.

Tooth and Nail20 grew from the multi-media performance, Mountains Clouds Turbulence Coastlines, presented at the Athenaeum Theater, Performing Art Chicago’s PAC/Edge Festival in 2005. Two men who are sometimes “headless,” decapitated, or who have simply lost their heads, investigate the making of a hand grenade. A ten-year boy considers the merits of a Scout Masters’ ruminations on how to properly discipline a boy, the merits and problems of what he calls “Impertinent Punishment,” and matters of the heart. The boy considers the study of energy and its transformations and how things change. References include Death in Gaza (HBO Documentary Film, 2004) by James Miller; Regarding the Pain of Others by Susan Sontag (Farrar, Straus and Giroux, 2002); When We Were Orphans by Kazuo Ishiguro (Knopf, 2000); Terror and Liberalism by Paul Berman, Discipline and Punish by Michel Foucault (Gallimard (France) 1977); A Mighty Heart by Mariane Pearl (Virago Press, 2004); Who Killed Daniel Pearl? by Bernard-Henry Levy (Melville House, 2004); Inconvenient Evidence: Iraqi Prison Photographs from Abu Ghraib (International Center Of Photography, NYC, 2004); Scout Leaders in Action by Walter G. MacPeek (Abingdon Press, 1969).

This research and multimedia work further lead to Heads or Tails, a site-specific installation at Preston Bradley Hall, the Chicago Cultural Center, in November 2005. Originally the circulation room for the Chicago Public Library, the hall’s walls and ceiling bear the names of great (primarily Western) writers on its decorated arches, alongside inscriptions in ten languages extolling the wisdom found in books. The process of contemplating the loss and failure of words was at the heart of this project. It included large format photographs that I made of polyurethane cast heads (by Matthew Owens), video projections, live music and two men searching for safety in the form of a safety pin on orange mason line strung across the installation space. Heads or Tails incorporated images and text from a found diary and log discovered in a used bookstore in Estonia.

Steven Thompson and Douglas Grew were invaluable collaborators and performers in developing this work as well as the ten-year old Alex Schorsch, who has since grown older.

the architecture and public spaces of several cities in Brazil and around the world. Through unprecedented, large

format projections, the festival promotes cultural and artistic exchange among art-media students and artists while

providing a unique experience to citizens and spectators.

The School of the Art Institute’s F Magazine interviewed several of the artists in the exhibition in these two articles:
Article 1 | Article 2